Innovative design can improve our daily lives in unexpected ways; a relevant glimpse into the many possibilities for change that the designers of tomorrow have in store for us was the „Restless Domesticity” project presented by Goldsmiths Design students to representatives from electronics giant LG. The brief asked MA and MRes students to reimagine the practices of cooking, cleaning and storage in a modern home while taking into consideration an European context. 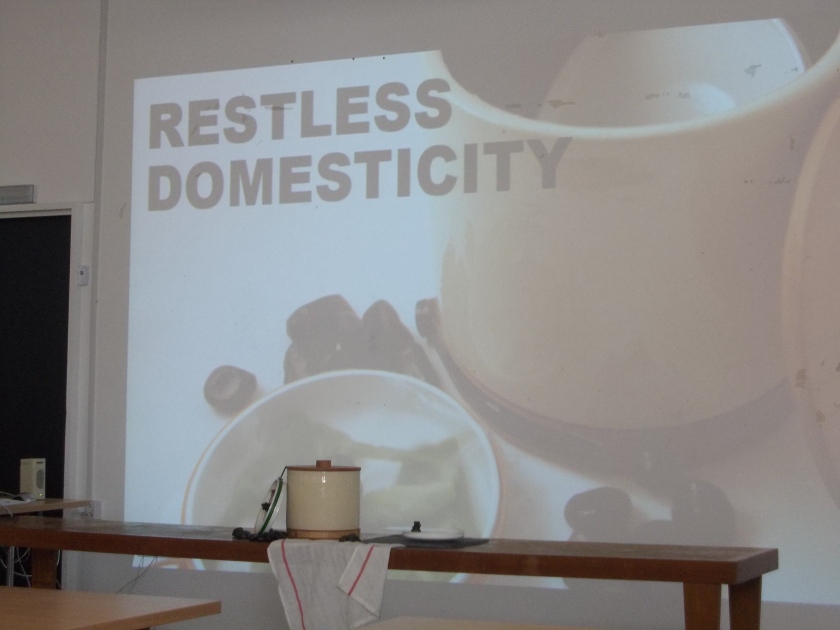 A concept thoroughly explored in the presentation was induction cooking, which uses electromagnetic induction to heat the cooking vessels themselves, as opposed to the heat transfer principle of traditional cooking. Even though the technology has been around since the 70’s, it has never quite made its way into everyday life and is therefore quite an expensive niche at the moment, but the students appeared confident that it has the potential to be The Next Big Thing. And why wouldn’t it be? Induction cooking is faster, more efficient as far as energy is concerned, and less dangerous, minimizing the risk of burn lesions, as the cooking surface never gets too hot- not to mention you could take the hob right off the cooker immediately and put it on the table, ready for dinner, without having to worry about a burn mark on your tabletop. The main disadvantage is the necessity of using only adapted pots and pans or at the very least made of electromagnetic metal, which may require a radical change in our kitchen for most of us, but the students aimed to prove that the change is worth making.

The Stone line of induction cooking appliances proposed by the „Angry Bananas” team is a fully realized concept,from design to branding, and it has already gained praise online, having been featured on a number of design blogs and generating excellent feedback for its makers, who claimed to have received questions about the date of its market release. The Stone appliances include a special stove, a pan, a modular toaster, a kettle and a grill pan that also functions as an adaptor, allowing the owner to still make use of cooking pots that are not specifically adapted for the induction stove. The products would allow for lower manufacturing costs (for instance, the Stone toaster has only 6 components instead of the 100-plus parts of a traditional toaster) and they would be made of sustainable, long-lasting materials: birch wood, porcelain, stainless steel. The models presented were not, for now, working prototypes, but did a great job of showcasing the interesting design of the products, evoking traditional kitchen tools and minimalist, forward-thinking design at the same time. The team have also thought of an attractive and intuitive interface that would help the user set the right temperature on the stove and tifind out when their food is ready. 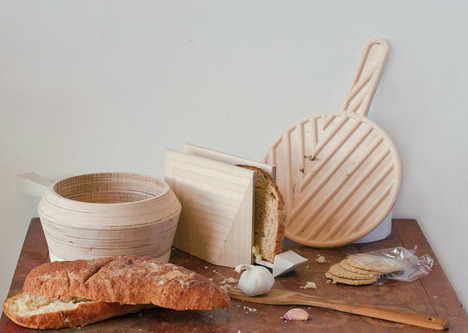 Other applications of induction cooking were the Soo cooking system, aiming to bring into the homes of regular consumers the latest high quality restaurant trend of cooking „sous vide”, and CookMate, an induction cooker embedded into a portable mat and a strip that can be wrapped around a regular saucepan, targeted at young people living in rented accommodation, who are often moving home and sharing appliances. „Sous vide” – slow cooking, in a water bath, of food sealed in airtight bags- is very fashionable in restaurants, but not exactly easily accessible to the home user, though the slow cooking time is compensated by the ability to preserve the cooked food in vacuum for much longer, and the resulting meals are very healthy. There were technical issues still to be overcome for both of these projects –how do we remove the food from the water bath safely? How do we deal with the coils of the portable cooker overheating?- but it will be interesting to see in the near future if Goldsmiths students have accurately predicted the commercial potential of induction cooking.

Another interesting idea was an „intelligent” and very advanced refrigerator featuring many benefits: the ability to keep track of its own contents and their expiration dates (relying, however, on omnidirectional scanning of 3D barcodes, a technology not in use at the moment), a Tamagotchi-inspired interface, rotative shelves that ensure you always get to the food at the back of the fridge and an alien-like design, making the fridge look like it doesn’t necessarily belong in the kitchen- and ensuring, therefore, that it could belong anywhere. The concept of its creators, Ryan and Wei-Chia, was based on the idea of playfulness and re-imagining the kitchen as a playground. It is fair to say, though, that it will still be a while before we have such an advanced refrigerator available on the market. 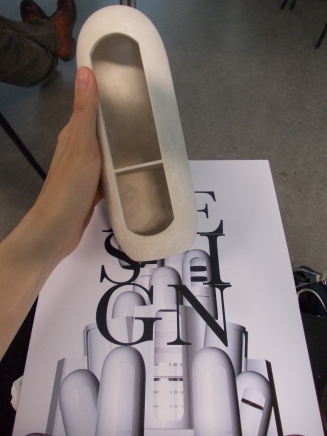 Have you ever wondered why the door of your microwave oven has a metal mesh screen behind the transparent window? Its purpose is to prevent leakage of harmful radiation, and the technology behind it has not been changed for more than 40 years. Chang Hee Lee (whose innovative radiator was featured previously on the Design Blog) thought of something different: replacing the metal mesh with a sheet of mica, a mineral with excellent isolation properties. The new shield would be more efficient as a radiation barrier („citation needed”, said those present, to which Chang Hee promptly displayed a long list of references) while also being completely transparent, allowing for better visibility of the food as it’s being cooked. It’s the kind of change that doesn’t ostensibly revolutionize a product completely but would, in fact, make a big difference. Its designer named this new microwave oven „The Green Box” and the simple, very-patentable idea received favourable feedback.

A modular mobile kitchen with built-in services (washing machine, cooker…), designed to give people on the move something tailored to their needs instead of having to „make do” with what their landlords offer them, as well as systems to dispose of food waste cleanly and without smell and to allow different items different refrigerating temperatures according to their needs were also pitched. The most refreshing thing to see, however, was not how forward-thinking the ideas were (although they certainly were), but how the students found inspiration in day-to-day issues and took a thoughtful, critical look at today’s society and what cooking, storing and cleaning mean in a world where people are often living in rented space, having a less prominent connection with the kitchen space than in the past and engaging less often in long-term investments for it. They were also keen on respectful debate regarding each other’s ideas, asking questions and always keeping an eye on energetic efficiency, recycling and safety. We can only hope that the representatives of LG were just as pleasantly impressed, but I certainly left the presentation with a new found appreciation of cooking space and its future.