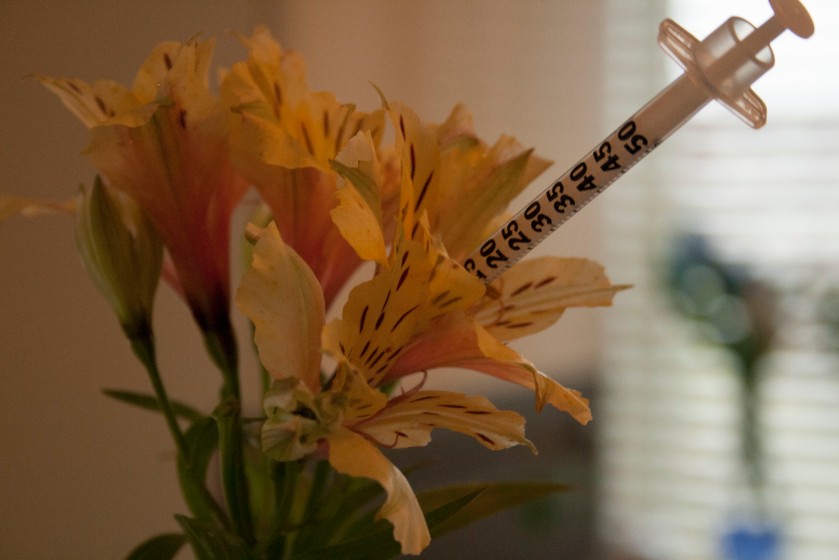 You may have heard that honeybees are in trouble and dying out at an alarming rate. But have you thought about what our world would look like if they were to disappear altogether? This is the (very real) possibility that MA Interaction Design student Tom Hoare is exploring in his graduation project, which you’ll be able to see at the upcoming MAID final show (1-4 December 2015).

Tom became interested in bees after visiting a Cornwall honey farm while on holiday: “I thought, this is amazing. Watching it, seeing things happen and being a part of it cemented the actuality that there is a problem.” Tom wanted to approach the issue from a different angle rather than jump on the bandwagon of already-existing initiatives such as urban beekeeping, so he faced his phobia of syringes and set about making honey himself, in order to find out what it would mean for humans to take on the work of honey bees.

The process turned out to be extremely laborious, with two kilograms of honeysuckle resulting in less than 5 ml of honey after three hours worth of work. “It’s quite possible, and the reason no one has done it before is because it’s just not an efficient thing to do”, Tom explains. You’ll have a chance to take a look at these honey-making tools and human-made honey samples at the MA Interaction Design exhibition.

Attempts of taking over the work of bees are already happening in other corners of the world: in some parts of China, where the effects of pollution and pesticide use have been particularly dire, farmers must pollinate fruit trees by hand. Tom has also investigated this scenario: “I went around with little paintbrushes, swiping the pollen off flowers. Imagine if everybody had to do that, for, let’s say, an hour of your week!”

These solutions are, of course, much too complicated and time consuming. “We’re not just good enough at emulating nature”, he concludes. Unfortunately, it seems that we’re not very good at appreciating all that bees are doing for us, either, since we insist in using pesticides that are not friendly to them: “Without bees we’d lose billions of dollars a year in agriculture, pollination and flowers. All our crops will die, and we’ll starve. It’s very scary, and there is a great possibility that it will happen”, Tom says. “People don’t seem to realise that, they just see profit margins in the short term”.

In addition to experimenting with bee work, Tom’s project also looks at how bee extinction would trigger larger scale changes in our way of life: “The other side of the project is looking at infrastructure, how our population will change, what our houses and cities would look like if we needed to have more green space and essentially act as bees. The outcome for that will be a series of chronological maps going from today, looking into the future and how that is going to shift.”

Tom’s research for his graduation project was three-pronged, involving reading, understanding while making, but also quite a bit of data analysis: “looking at census data and how we’ve monitored bees, at the green space we have available, analysing that very painstakingly, creating a new metric of green space for capita, and mapping that information onto geographical maps of the country.”

So how does Tom feel about his time at Goldsmiths, now that it is coming to an end? “It’s weird, through the process I didn’t feel like I was getting enormous amounts out of it, but at the close of it I started to realise that I’ve developed my way of working astronomically, I’m a very different designer, a very different person in my outlook. Some of the most enjoyable modules were just about working dynamically, and how to work better as a group of people. Ultimately, a very good experience.”

From the 1st to the 4th of December MA Interaction Design students will present their final work in the St James Hatcham Church Gallery. The projects will present propositions and speculative interventions into existing, emerging or possible ‘social’ settings and milieus that are in some way marked by technology, broadly conceived. Here, the students engage with and explore a wide range of concerns and interests ranging from punishment, death and misery, interventions into the UN buffer zone in Cyprus to the preservation of urban bees. The exhibition is a platform for students to document and present their unique approach to interaction design through practice-based research methods.