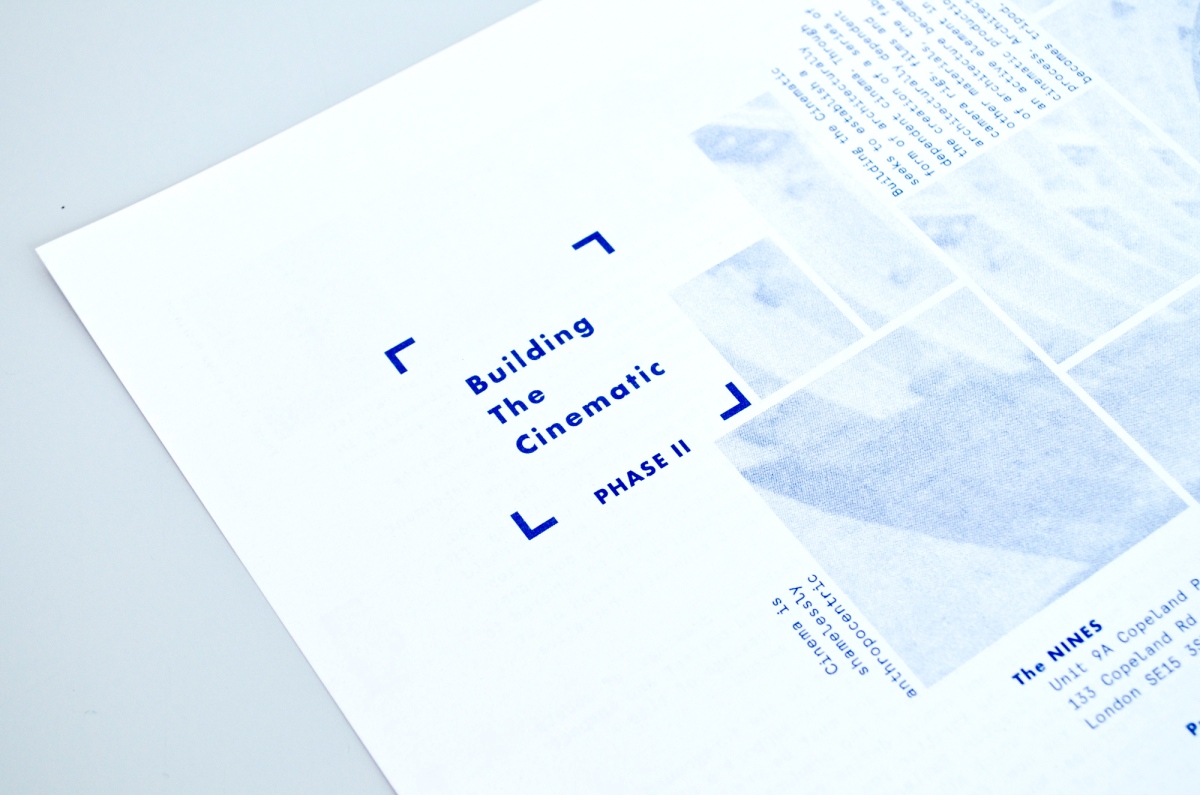 When I was notified on the 20th June last year – whilst exhibiting my third year project at the 2016 Goldsmiths BA Design show – that I had the opportunity to expand the work for a more public platform, I was initially apprehensive. The nine months spent developing the project had been a fatiguing coalescence of enjoyment, frustration and discovery. Was I prepared to endure that once again whilst subjecting the work (and myself) to a much wider, and possibly harsher, field of scrutiny? It turns out I was. In fact, all of the enjoyment, frustrations and discoveries that shaped the recent developments of my project have actually galvanised what I learnt whilst on the Goldsmiths BA Design course – not just regarding design as a practice but how I, as a designer, should operate as I transition from the academic landscape into professional terrain.

The project in question, titled ’Building The Cinematic’, stemmed from analysis of existing cinematic work, the majority of which has an anthropocentric (human based) focus. Architecture exists in the background. A large part of the project looks to shift this paradigm; teasing out the sensual, encompassing qualities of architecture using the format of cinema. Buildings are reframed as filmmaking resources through a series of camera rigs, manifestos and films projected directly onto architecture. Architectural input defines cinematic output. Alongside this, the project navigates a series of legislative frameworks regarding filming in London (particularly around the built environment), establishing a critique of those regulations.

Since the degree show, I have been busy expanding the project; developing its thesis through discussions with architects, creating new project materials and not long ago exhibiting the second ‘phase’ at the London Festival of Architecture (LFA) 2017, which ran from 1 – 30th June. Amongst it all, the development of new camera rigs offered the richest territory for discovery. Admittedly, the rigs I developed for the first phase of the project were very basic, the beginnings of a larger venture. The two new devices look to amplify the interaction between camera and architecture; the first – called the CRB_LSD rig – emerged from a fascination with revolving shots on film and an itch to create one which was a direct result of a surface manipulating a camera. Rolling a camera within a circular cage facilitated this, offering some fantastically disorienting footage. The other – called the SRFC_DP – originated from discussions with Mobile Studio Architects about abstracting the materiality of a building from the wider context of its form and the ‘grand architectural image’ which people often seek when photographing architecture. The exhibition brought about a satisfying resolution in seeing these surface frames – which are roughly 50mm x 30mm – projected at fifty times their original size; somehow activated in a way which eluded me in the editing process.

As these devices developed, my ontological understanding of them was evolving, as was my comprehension of the project as a whole. As obvious as it may sound, it took me a while to grasp that Building The Cinematic is an architecture project more than it is a film project and concurrently, whilst these devices are camera rigs, they are primarily architectural interfaces – contributing to an alternative architectural topography through the data they collect. Speaking of data, what came as a complete surprise to me was the incredible sounds these objects tease out through their contact with surfaces. Goethe described architecture as “frozen music.”1 If so, have I created devices of thawing? It’s one of those wonderful moments when the design process offers up something completely unexpected, especially when it proves to be so effective – my use of sound was described by one attendee at the LFA show as “painful”. Never has my sound design had such an effect on someone, so I took that as a compliment – even if it wasn’t intended as such.

As mentioned before, an opportunity to extend the project presented itself in the form of receiving the ArtISA award, which is funding designed to give students a chance to develop a graduate project for a wider audience. Normally this culminates in taking part in the London Design Festival of the same year. Discussions with the ArtISA foundation initially led me to investigating ways of situating Building The Cinematic within the former National Film Theatre – now known as the BFI Southbank. The idea was to develop work to enter as part of the London Film Festival in October in collaboration with the British Film Institute (BFI). However, as my understanding of the project fluctuated, this ambition evolved into taking the project to the London Festival of Architecture the following June, giving me more time to flesh out the work. The ArtISA foundation were entirely supportive of these adjustments and provided assistance with approaching these institutions and opening doors that probably wouldn’t have opened otherwise – I had the opportunity to discuss my work with the BFI’s head of programming back in September, which I didn’t imagine would happen anytime soon.

I’ve come to embrace unknowns when they arise. After all, to design is to grapple with uncertainty, which can be a fickle adversary. After five months of waiting and pushing for progress on a collaboration with the BFI, for it to dissolve due to ‘creative differences’ was exasperating to say the least (believe me, I hate that term but in this case that’s exactly what it was). Institutions are slow and complicated machines. I had dedicated so much energy to managing a relationship with the BFI at this point that I hadn’t actually designed anything new yet. I was unprepared for exactly what this institution expected of me – to accept uncertainty that I couldn’t physically manipulate into project material for long periods. At Goldsmiths I learned that the only way to grapple with unknowns is pragmatically; drawing something tangible out of a messy web of uncertainty, shaking up established parameters in the process. It’s a physical endeavour. So much so that to passively grappling with unknowns an impossibility (it’s pretty clear from this that I wasn’t going to accept their terms).

The project, however was suffocating and I needed to temporarily develop it without any external forces pulling at it. All I had was a few sketches and ideas drawn from what I wanted to do with the project whilst waiting for the BFI, so I put those into production and they revealed more about the project (and myself for that matter) than any work with a large institution would have. That experience, alongside a few others reaffirmed in my mind the need for designers to be resilient and stand by their convictions – when moving into the professional domain those qualities are more valuable. This notion was bolstered by my experience as a Graduate Learning Facilitator on the BA Design in recent months; the most important thing about the design process is that things fail all the time. What matters is responding to that failure and moving forward again and again and again.

It’s also important not to compromise on your design instincts. Whilst at Goldsmiths, this project was essentially set in motion when I asked the London Film Services what they considered to be a tripod, to which they responded “a stand with three legs that supports a piece of equipment”.2 I have held onto that definition to kick against it ever since; creating devices that are – by their description – not tripods, existing on the outskirts of what is considered correct by the legal frameworks of filming. At several points, external forces have tried to put it to one side, but it hasn’t stayed there for long. How can it? As an admirer of the filmmaker Laura Poitras, these points of contention with very real and oppressive systems make my process very satisfying. More importantly though, my process throws challenging questions towards me at these points:

“In pushing this, am I going too far? Should a designer even be engaging with this at all?”

Normally I find that is when the most exciting things happen…