It’s time for another of our interviews from the MA Interaction Design graduation show! Today we talk with Cameron Grace Poole about her project “Hello Lesbian”:

My project is a design research project about lesbians in online dating. I had an interest in feminism, which explores marginal perspectives in technologies; there hasn’t been a lot of work done in the field on this topic, and I thought dating technology would be interesting, because so many people use it these days. So that’s how it started; my display is a live research wall, so it’s still very much a research project, and my outcomes aren’t really concrete designs, but rather proposals for possible dating technologies that are different from what exists today.

I used a lot of methods to engage with lesbians, and some of those are displayed on the wall; cultural probes is one of them: I sent out an activity pack with 4 items to ten people, and they sent back the responses, which show inventive and innovative responses to the questions that I’ve asked.

Were your subjects people you already knew or strangers you found online?

Both actually. Some of them were people I already knew, others I found through a meetup group that I’d gone to in London; some friends of friends.

What kind of information did you get?

The first part of my project was asking people what they used currently for dating; I interviewed them to see what apps they use, why they’ve chosen them, and how they’ve met people. One of the first things that I found out was that people meet in serendipitous ways. For instance I interviewed this one person who had been talking to her current girlfriend online for six months before they actually met up. They went through this long period of building trust with each other online. And that wasn’t what I was expecting to hear. I thought that people saw each other online, liked each other, messaged each other and then went out for drinks the next day. So that was quite interesting. 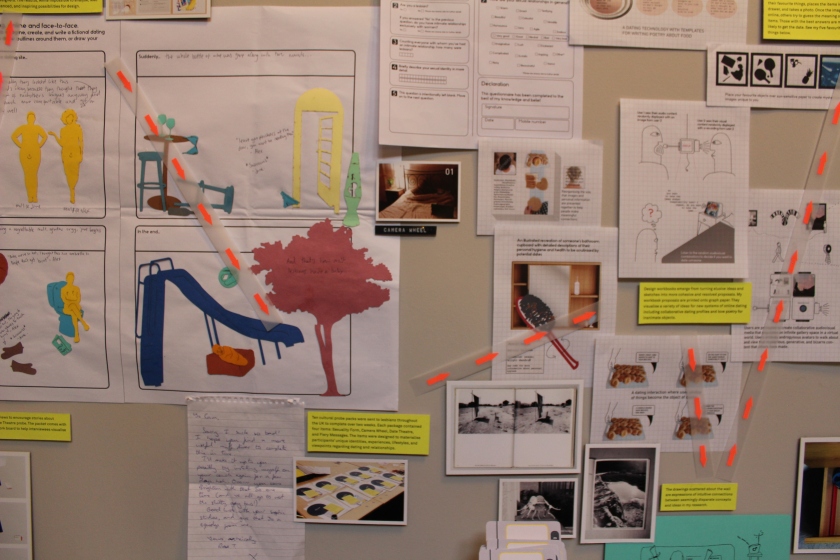 With the cultural probes, people told fictional dating stories, and they came up with crazy ideas, for example in one of the stories someone gets bonked on the head with a pineapple and they end up forgetting the whole date. They all range incredibly from one day to a lifetime, just narratives of how relationships form, and the way they inspires design is not really linear, but there is so much to take from them. Also on the wall are my final ideas on what dating technologies could become. It wouldn’t just be for lesbians, anyone could use it- you pick your five favourite things , put them in a box or a drawer, take a picture of it, put it online and then people can guess what those things mean to you. The idea was to get away from the profile picture and the profile itself as a way of representing yourself, and looking for other ways that you could represent yourself, just to change it up.

So instead of the profiles being looks-oriented, you’re aiming to make them more personality-oriented?

Yes, but I think people could use this concept in different ways, not necessarily this nice little way that I’ve set out for it. For instance they could put a bunch of products on display to show their financial status. But I think that’s part of what’s interesting about it.

I may have had a negative perception of online dating in the beginning, and that changed. I hadn’t actually used online dating before to meet with people, and I tried to be open-minded about it. Hearing about people’s relationships and the people that they’ve met this way has showed me that people actually use online dating and that it works for them. When I talked to lesbians, I thought it was interesting and unexpected to hear that they didn’t like using apps currently labelled for lesbians, actually- they preferred sites that were for everyone, like Plenty of Fish or OK Cupid.

So if you were to wrap up what you found out from your research in a conclusion, what would that be?

My conclusion would be that a lot of the forms and systems in current online interactions should be re-thought to make life more interesting and more fun, and that dating technologies are one of those systems that could be re-thought.