2017 was the year the Design department at Goldsmiths launched its new, post-disciplinary MA in Design: Expanded Practice. For their first brief on the programme, students were asked to work in teams and approach museums from a different perspective: Musée des Refusés, a space in which what is rejected by museums, cultural institutions and/or by society as a whole may claim attention.

One of the teams decided to take a deeper look at mass surveillance in public spaces and how it could be disrupted. Fivos Avgerinos, Riya Gokharu, Wonji Jeong, Erin Liu and Anastasiya Vodolagina created masks that can ‘trick’ facial recognition software used in surveillance cameras, and in the process, help us question why we have become so accepting of mass surveillance in the first place.

What does the mask do, exactly?

On the design of the mask:

Fivos: “We experimented with various different designs, including some made of metal, which worked so well that the app sometimes can’t tell you’re a person at all. But then we decided to make something more subtle and light.”

Erin: “The idea is to blur the line between a mask and facial jewellery, so if you were to go into a space where masks are banned, then there’s the possibility that this mask would push that boundary. We wanted something that is approachable and actually has the potential to be worn.” 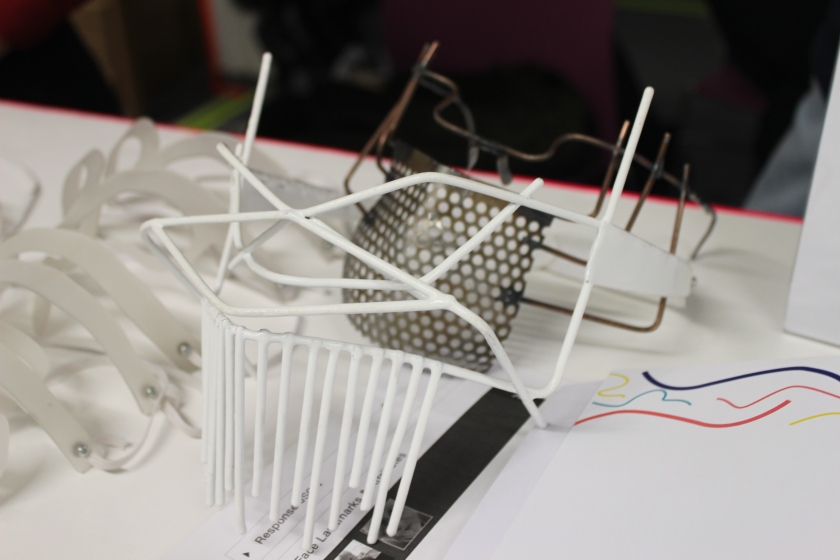 How does the work relate to the Musée des Refusés brief?

Erin: “When we were doing our initial research, visiting museum spaces, we were struck by how you definitely  feel that there is a code of conduct, whether that code of conduct is explicit or whether it is just implicitly felt. That code of conduct is enforced by different symbols of surveillance in the museum space, whether they are CCTV cameras, invigilators that walk around the space or security guards at different points around the space. We ended up researching mass surveillance in the UK- London is one of, if not probably the most heavily surveilled city in the entire world. Our argument is that the attitude we have towards surveillance in museum spaces, where it is almost considered necessary as part of the architecture of the space, is actually very dangerous when applied to a wider context. There is a sort of apathy that develops, and a lack of criticality about how we are so heavily surveilled within the city, and to what end, especially when a lot of these surveillance technologies are not necessarily effective in achieving what they set out to do.”

Could interventions like these help people become more aware of surveillance, and more critical of it?

Erin: ” I think that is our aspiration in a lot of ways, yes. In a museum space where masks aren’t allowed, the question arises whether these would be OK to wear. And if you were to wear them, you would also signify your awareness of being watched, in the same way that cameras and security presence signify that you are being watched. In a wider context, these masks play into the facial recognition scheme, in that a face is still recognised, and yet it’s always recognised as somewhat other than your actual face.”

Why did you choose to study on the MA in Design: Expanded Practice at Goldsmiths?

Erin: “I think it was the claim of having a post-disciplinary approach to design which made me choose it. I did my undergraduate in history of philosophy. I think there’s an emphasis on blending a variety of different practices, and suiting different practices to the research you want to be doing. Also, the way that Goldsmiths practices design is very critical of the way design exists both in a professional as well as an educational setting.”