Starting this year, MA students in the Design department have the use of new studio spaces based in the Lewisham & Southwark College (LESOCO) campus at Deptford Bridge, a short walk from the main Goldsmiths campus. (Design students shouldn’t be too worried about missing out on the Goldsmiths vibe and connections: the MFA in Fine Art studios are also based at LESOCO.)  On the day these photos were taken, the new studios were already abuzz with activity and work in progress.

For the first term of the course, the brief that all MA in Design: Expanded Practice students have to tackle, titled “NO NO NO!”, asks them to “proactively look for sites, contexts, situations to refuse to disrupt the flow of gentle polite agreement and test resolve, test systems, test everything.” As a follow-up of last year’s Musée des Refusés project, it encourages students to take an even stronger stance against the establishment: “NO is always a moment or an interruption. It’s not the licence to continue with status quo, with passive nodding heads. It’s a defined interruption, a moment that marks a test. When No is said all is not fine, something usually needs to be addressed.”

The MA in Design: Expanded Practice is divided into several studios, and each of them interprets the brief through the lens of their particular focus. For example: one team from the Spaces and Participation studio is using the task as a reflection on censorship. What if instead of a central authority having the initiative on what needs to be hidden or banned, we’d allow regular citizens to give their opinion, and censor everything they wanted to see censored? As Charlie Manthorp explained, the project team he is part of is taking this idea of “democratic censorship” to its logical extreme, imagining a “Bureau of Public Outrage” that leaves little room for any freedom of speech. 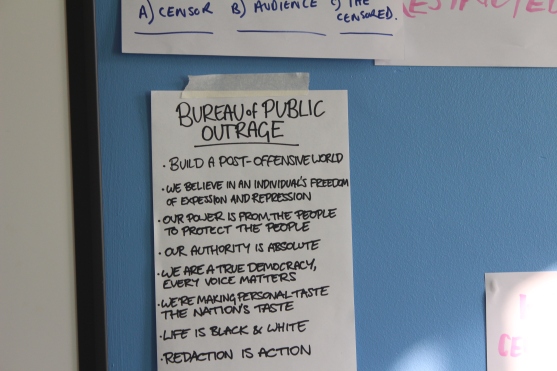 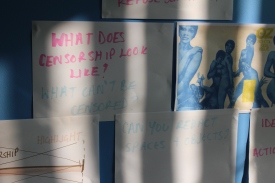 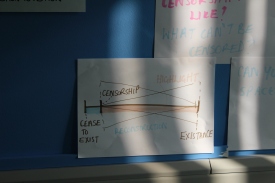 Meanwhile, a team from the Communications and Experience studio chose to investigate stereotypes about ethnicity and race. I took part in a game that matched profile photos of people of different nationalities and ethnicities to a map of the world. Nacho (Qianni Gong) told me the test was just a small starting experiment: the project team will use a variety of methods to continue their research into the topic.

On this day of visiting the LESOCO studios, students were taking part in a workshop led by Studio Coordinator Vinny Esteban Perez. “The Affordances and Anti-Affordances” brief involved finding different uses to a found object or material, including less obvious uses.  Participants found that an object as simple as a brick could be used as an ashtray, block print, ruler, pestle and mortar, weapon or laptop stand; a wheelbarrow can be a seat, an exercise machine, a massage device, a hanger for stockings or a heater, depending on one’s imagination. Another student team took the idea even further, choosing as a context for their object’s different uses a foreign planet populated by people with six eyes.

You can find more photos of the MA spaces and the Affordances workshop on our Facebook page.