For his graduation project from the BA Design course at Goldsmiths, Joseph Thompson is trying to uncover the complexities of craft processes:

“I’ve been looking to expand what is meant by the word “craft”, and unpick the problems with it in contemporary culture.  The output that I’ve created is a diagnostic tool for ceramicists to re-evaluate how they throw pottery, which comes from the idea that people who have an ingrained habit find it inconceivable to change, or to progress in their practices. This tool exists to disrupt the process that they normally throw pottery by, so that they can re-evaluate and train themselves to learn different techniques.

The experiment consists of ceramicists throwing under a strobe condition, and there are two ways you can configure the strobe light. One is to act as a stroboscope, where the pot is completely still, so every time it does a rotation, you see the same side of the pot. This makes it really difficult to tell if the pot is off-center. The second way you can configure it is to allow people to set the strobe themselves. I found that when people were throwing under these strobe conditions, those who weren’t as confident would turn up the speed, whereas those who were more confident would turn it lower. END_OF_DOCUMENT_TOKEN_TO_BE_REPLACED

Annie Kruntcheva’s 2017 graduation project from the BA Design course at Goldsmiths started as an investigation into fear of death, and gradually turned into framing increased longevity as a conspiracy theory:

“We’re all being made to live longer because of our fear of death, but in doing so, we also have to work longer. So, an extended human lifespan is for the purpose of capitalist gain. We’re currently seeing more and more people living up to, and past a hundred years of age, but with that come many repercussions for climate change and overpopulation- and if we live longer, we’re going to have to finance that life.

I’m also looking at what happens to human purpose when work disappears. We’re raised to believe in a three-stage life, education-work-retirement, and the value of hard work is embedded into human culture. But what happens when we can’t work? With automation, precarious work, universal basic income, it’s looking more and more like the corporate ladder, and human jobs altogether, will disappear.” END_OF_DOCUMENT_TOKEN_TO_BE_REPLACED 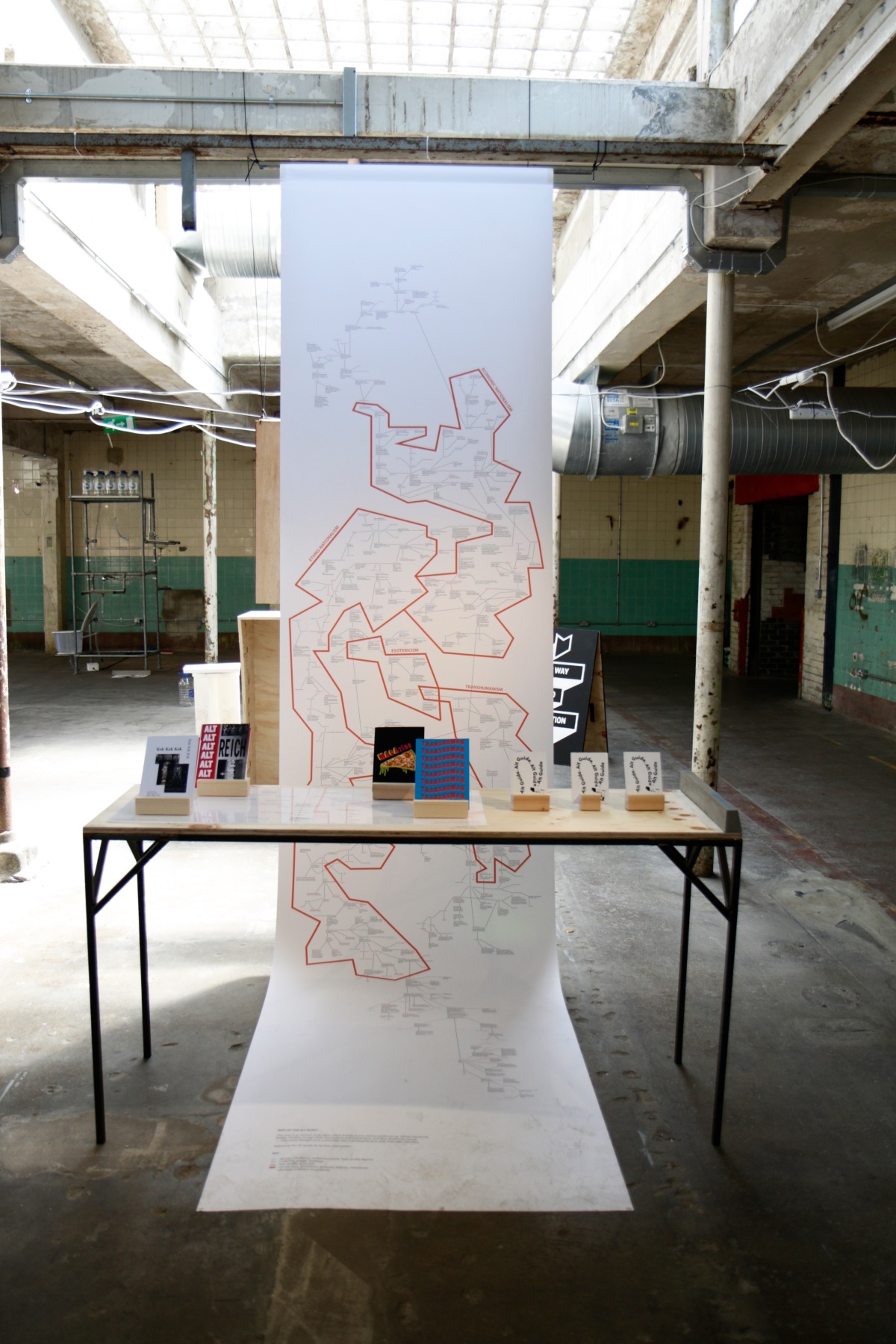 The digital age has inevitably changed politics, but the complexity of movements spreading online can be difficult for outsiders to understand, especially for those who still see traditional political frameworks as the point of reference. For her graduation project from the BA Design course at Goldsmiths, Annalis Wiramidjaja investigated contemporary far-right ideologies and their 21st century methods:

“I’m looking at the ‘alt-right’, which is a modern form of white nationalism and ethnic nationalism, and I’m trying to contextualise them as a culture. That will help us understand them better, and hopefully, to combat them. I’ve created a series of magazines, which explore the different cultural and social touch points for different aspects of the ‘alt-right’, and a diagram that breaks down the movement into four different factions, using different aesthetic markers, or specific things they care about. I am using the magazines to help people who are not as familiar with the material get a glimpse of its context.”

On what the movement is, and how it fits into the traditional left-right political spectrum: END_OF_DOCUMENT_TOKEN_TO_BE_REPLACED

The industry that produces chocolate comes with a heavy human cost- yet it’s far too easy for Western consumers to turn a blind eye to injustices and hardships that happen far away from them, out of their sight. For his BA Design graduation project, David Fenton developed a video game that puts the player in the shoes of people affected by the West African cocoa trade:

“My project follows the philosophy that being playful about important issues is serious work. It’s a video game for the mobile gaming market, about a very serious issue, namely child slavery in the West African cocoa industry. The game is called Modern Cocoa Farmer, and we have a website as well, ModernCocoaFarmer.org, which raises awareness and educates about the plight of children in the cocoa industry in West Africa. It is intended to be used as an educational tool for children in the UK, to discuss and learn about these issues, and it’s based on real statistics.

I’ve been lucky enough to work with some friends on the project: a programmer, a musician, who also created the sound effects for the game, and a pixel artist. So I found myself in the role of the vision re-iterator, the person who is trying to keep everyone focused, and turn the idea into a reality. We’re hoping that this form of empathy gaming will take off and become much more mainstream, as a way of talking about social issues.” END_OF_DOCUMENT_TOKEN_TO_BE_REPLACED