Contemporary scientific and technological advances make our lives easier in so many ways, that perhaps we are starting to take them for granted and fail to notice anymore how amazing they are. Every home appliance we have is, actually, a wonder of technology. Third year BA Design student Alex Duffner is hoping to bring scientific curiosity to the regular consumer with his graduation project, “Domestic Science Machines”, which combines home appliances with scientific instruments in order to facilitate home experiments. 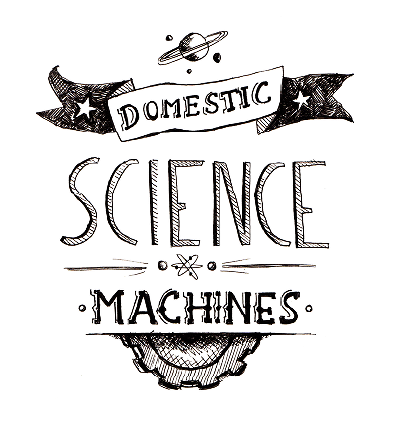 Alex has always enjoyed taking things apart to see how they work, and after seeing grown-ups playing with scientific toys and experiments designed for children at the Science Museum, he realized that other adults could have similar interests. Home science experiments for adults are an under-represented to non-existent niche at the moment, but one with great potential. However, justifying, as a non-scientist, the purchase of a scientific instrument to satisfy your curiosity could prove to be a difficult decision for adults who are trying to spend money in the most rational manner possible, not to mention that for most of us the appearance of such an instrument would be so alien, we might be unable to identify it when we see it in a shop. Alex believes he’s found the solution to this problem: he designed hybrid product that are fully functional both as home appliances and scientific instruments, providing the consumer with the familiar aspect of an object they already know as well as with a practical use besides the scientific experiment angle. Maybe people wouldn’t be likely to buy a spectrometer just to indulge in scientific fun at home; but what if it also works as a coffee filter? You get an added benefit that would also presumably be more cost-efficient, in an object that you are already comfortable to use. 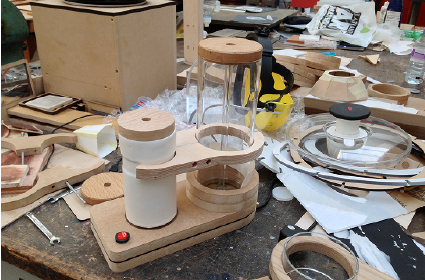 I didn’t mention the spectrometer/coffee machine combination for nothing: this is, in fact, one of Alex’s current prototypes, along with a salad spinner that also functions as a centrifuge, a slow cooker that can cycle through different temperatures and therefore be used as a PCR cycler (a laboratory tool used for DNA tests), and a webcam/microscope whose use Alex demonstrated for me in the workshops (he has also built a case in which the device can be carried and connected to a tablet instead of a PC). These are just the objects that he was able to build for the moment – and he spent many long hours refining these prototypes and re-building them over and over again; the centrifuge was in its fifth incarnation; the coffee machine had three differently shaped bases spread across the workshop. However, the idea could be applied to many other devices. Alex has added further value to his prototypes by building them from durable, sustainable materials: ceramics, high quality oak wood, high quality glass procured from a professional glass blower who works in the field of scientific instruments. In a world of disposable plastics, his Domestic Science Machines would be more traditional and organic-looking, long-lasting and honest.

While the idea of being able to gaze at a magnified image of your food or your own skin on a webcam, or analyzing the composition of your coffee with a spectrometer, sounds like plenty of fun, Alex didn’t think of this project in terms of entertainment value- what he hopes for is to encourage people to engage in actual science, and maybe even make scientific discoveries of their own. It doesn’t take that much to be able to perform experiments, and in the beginning, scientists themselves were making do with that whey could find, building their own tools, far more primitive than those of today; what’s more, even in modern days, in science labs, simple everyday appliances are put to scientific purpose alongside legitimate scientific instruments- Alex has seen, for instance, microwave ovens used for sterilizing in laboratories. His hybrid appliances could incite curiosity in people and, who knows, perhaps become scientists themselves. Alex explained to me that while scientists may not be particularly fond of admitting it, science often works through “happy accidents”, unintentional discoveries that change the world. Such happy accidents could happen every day right under our noses, but because we lack the tools to pick up their meaning, they are unfortunately lost. With Alex’s Domestic Science Machines, it’s not that far-fetched that the next big discovery can be made in the kitchen of a regular person.

Alex is confident that his idea could have commercial potential (perhaps in a company like IKEA, that encourages their customers into making and building) and he wants to continue on this path of combining science with design. After his approaching graduation, he would like to gain experience in product design and then continue his education. Before seeing his project at the Undergraduate Design show, you still have time to have a look at his website.

One thought on “The Domestic Science Machines of Alex Duffner”