Tom Lancaster graduated from the BA Design course at Goldsmiths in 2005 and he is currently Head of Design at the Greater London Authority. Here he is answering for us a few questions on his time at Goldsmiths, his career path  and designing campaigns for the Mayor of London.

Q: What does design mean to you? What’s the mission of design in the world?

A: For me, design’s mission is to improve the things we use every day, to make products, communications and services enjoyable, and to dream up ideas that can make life richer. For visual design – that means having a reason to communicate, being clear, offering something original, maybe even charming, and only saying what you need to – not boring your audience or taking their time for granted.

Q: How would you describe your design aesthetic?

A: I think my aesthetic is bold, geometric and spare – I like to reduce a concept down to a pure expression of it, so that often translates into simple shapes. Generally I think simplicity can be underrated and misunderstood, but I think it’s worth persevering and cajoling others to see its value. When it comes to type, I like words to feel crafted and considered and I’m currently a big fan of wide tracking.

Q: Tell us a bit about your career and how you got started and got where you are now after leaving University.

A: I got my first real design job at Clear Channel Outdoor, about six months after graduating and after sending a lot of job applications! There I designed billboards for small businesses and generally got a great grounding in type and large format. In my third year I’d interned at Orange and after a year of working at Clear Channel they got in touch to offer me a Design Manager job. At Orange I art directed online and print communications along with stacks of merchandise including some particularly exciting Christmas gift boxes. Orange taught me a lot about brand beyond logo and type, and that was put to good use when I worked on the creation of Everything Everywhere there. After about three and a half years I saw the job I have now at Greater London Authority and was lured by the opportunity to manage a team and to work on a really wide range of projects. Now I look after the team, still do some hands on design and creative direct campaigns and branding.

Q: How do you cope with the pressure when working for a “big” client whose campaigns have a lot of visibility and expectations attached?

A: Being confident in the quality of work is the most important factor – so if I think there’s anything I’m not sure about, it doesn’t go out – even if that makes more work. That’s the only way you know you’ve done your best. Also I share work with other designers, get honest feedback and improve and hone work following it. Last of all, being disciplined when it comes to planning and timing means there’s less panic, less rash decisions and more space for creatives, writers and suppliers to do their best.

Q: You work for the Greater London Authority now, what kind of design identity would you say London has? How are you approaching the campaigns in terms of making them effective for London’s extremely diverse audience?

A: It’s hard to say – there’s the obvious touristy stuff – red buses, beefeaters, skylines featuring the wheel and Big Ben etc. – but I think London’s design identity isn’t about landmarks. Some of the things I notice are the timeless wide spacing of letters on tube station signs, a fondness for visual wit and an original rebellious spirit that borne out of people coming to the city to create and make their mark.

As you say, Londoners are a really diverse audience so there’s no perfect pitch that appeals to everyone. Having said that, some of the principles we stick to are using plain language to be accessible, not underestimating our audience, inviting Londoners to take part, not telling them what to do, and generally respecting their time – so being clear and to the point.

Q: Tell me about your Tuxedo Tom t-shirts- how did you come up with them, and how were they received? 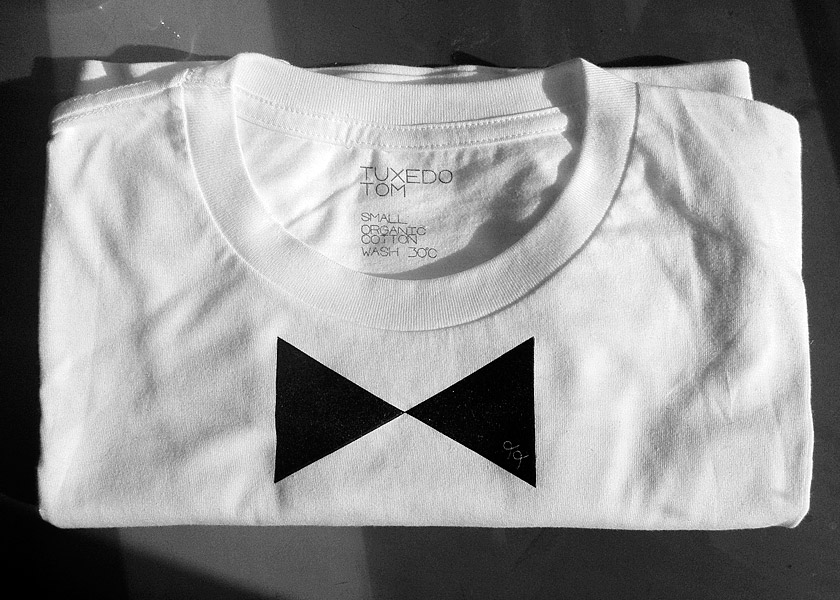 A: I thought up my Tuxedo Tom tshirts back when I used to wear almost exclusively black and white clothes – I used to crosshatch on my trainers so making my own tuxedo tee was a natural next step. I can’t say I’ve sold many – a friend who is very successful in the fashion industry told me I had to write a business plan but I just made a few tshirts and crossed my fingers for sales which is absolutely not the way to go about it – tsk tsk. A highlight was having them in The Poundshop at Wieden and Kennedy though – anyone that wants one to buy one should get in touch – they’re abstract, geometric and party ready!

Q: What was your experience as a student at Goldsmiths? What do you think you got out of it?

A: The honest answer is I didn’t know what I was doing half the time and without a set outcome to achieve I found it very difficult to focus and motivate myself – I think I often got lost in projects – not in a good way! Having said that I met great people, found my own stark visual aesthetic during those hazy projects, and finally had a burst of activity that resulted in a raft of rug making, screen printing, slip casting along with a lot of drawing. I think being in a really creative environment daunted me for a while, but after interning I really got a lot out of it. Also it goes without saying it’s a good name to have on your CV – I just don’t list my 2:2!

Q: What advice would you give to a first year design student?

A: Take advantage of all the amazing places, galleries and areas there are in London – go into town and experience design rather than worrying about it in halls. If you don’t know what to do ask someone – and enjoy the acres of time you get to draw, film, write and make things. I think it’s also really worth learning about the wider industry and getting to understand what sells, who creates it and who it’s for. More than ever it’s so easy to share your work too and to follow the people that are creating great work and running creative businesses.

Photos courtesy of Tom Lancaster; visit his site and blog to see more of his work.