Embroidery and cross stitch are usually associated with femininity, and seen as less sophisticated than other crafts. A keen cross stitcher herself, Eleanor Price is challenging these perceptions through her graduation project for the BA Design course at Goldsmiths:

“I’m looking at embroidery and how it could reach a wider audience. I’ve been using cross stitch to make house plans, using the femininity of shapes, and the skill, on something that’s seen as more neutral. And I’ve been building extensions on the houses, as a fancy element of decorating a house. I started by trying to think of things that were already shown through cross stitch imagery, and house imagery is one of them, but it very much consists of idealised cottages and wooden houses in the mountains. It’s a kind of fantasy that I don’t feel many people have anymore. So I started looking at more achievable fantasies that you could work towards, and that everyone could relate to- and house extensions is one of them. ”

On the intersection between architecture and embroidery:

“I found out that you can draw 1/50 scale architecture perfectly on 14 count aida fabric (the number represents the distance between the fabric’s holes). So I wanted to make the house plans as architecturally viable as possible. Both architecture and cross stitch use scale a lot, and I tried to make sure the plans were to scale, and get as close as I could to the actual symbolism used in architecture, because I think it looks weirdly similar to stitches. 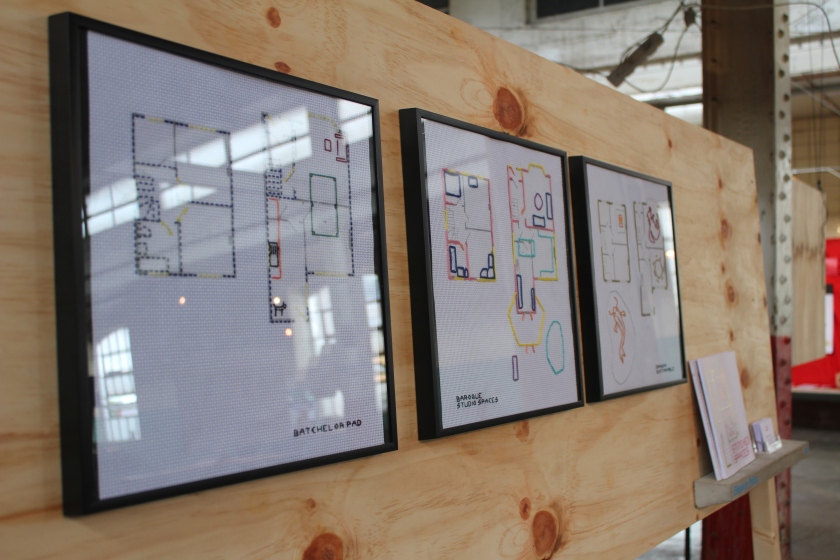 When people cross stitch houses, it’s a fancy fantasy, but so is an architectural drawing. It’s a more approved fantasy, but they both fit into what you want. I was hoping that the project would show a more playful aspect to architectural drawings, but a more serious approach to embroidery. I think a lot of craft is very intricate, you just don’t see the scale of it. You don’t think, or have to think, of the measurements and maths that went into it, a part of it being beautiful is that you can’t tell how it’s made. Here, I’m crossing the pure mathematical side with the decorative side.”

On her own cross stitching hobby:

“My mum also sews, and we just had lots of cross stitch kits around. I’m quite creative and I liked to be different when I was little, so I just kind of picked it up. I liked doing things that take a very long time, and this takes a very long time! I enjoy building up the imagery, particularly kits from 1980s, because they can have some very strange pictures in them. “

On the value of her cross stitch work:

“I did an embroidered piece on how long it took different professions to make a hundred pounds. I was sewing for different lengths of time, and it brought on a conversation on what is a hundred pounds worth of embroidery: 14 hours of work on minimum wage, eleven hours for a GP salary, fourteen minutes and sixty stitches for a professional footballer. How many stitches is a hundred pounds, really? I find it really hard to place the worth of it, because it is so personal.”

On the research behind the project:

“I looked into the history of embroidery and its uses. In Victorian times, it was seen as what an ideal woman should do, because it’s quiet, stay-at-home, so sometimes it’s a very isolating procedure, but there were also a lot of women’s craft circles. It was also used in education, to teach women how to read and write. They would learn their basic ABCs, counting, and bible verses through embroidery, they’d learn etiquette, and how they should behave. So it really is a very feminine activity, and it’s weird because in a way it was really isolating to women, but on the other hand it got them education and managed to move them up in the world. I think the gender aspect is very important, but also one of the reasons it’s not taken seriously.”

On encouraging beginners to take up cross stitch, and their reactions:

“I got people who weren’t interested in embroidery at all to draw their ideals of a floor plan, and at first they were saying, “I don’t really want to sew, it’s too hard”, but once you start doing it, you get really into it and you start getting a sense of accomplishment, and a need to complete it.”

“When something is made by hand, it’s never completely perfect, but that adds to the human element, and makes it more personal to me. The added value is the error. As you’re doing these house plans, you get more ideas for the designs and how you can improve them as you go along. With some of the plans, the scale wasn’t working in practice and I realised I had to make them bigger, to fill the space. I find it weird to separate production and design, which is what happens in fashion and the textile industry, whereas with embroidery and cross-stitch, they’re very much together.”

On her experience on the BA Design course at Goldsmiths:

“You had people around you doing the polar opposite to what you’re doing, but you could all talk to each other and interact. That’s always fun to see, how you fit in with that, and how their ideas fit in with yours, and how ideas merge to make something you couldn’t do elsewhere. I’ve been cross-stitching for ages, I never thought it’d be something to take on to design with, but this course enabled me to think that I could do anything with design.”